Popular Post > Uncategorized > Driven: The 2023 BMW i7 And 7-Series Are Near-Perfect Flagship Sedans

No comments to show.

Driven: The 2023 BMW i7 And 7-Series Are Near-Perfect Flagship Sedans

Driven: The 2023 BMW i7 And 7-Series Are Near-Perfect Flagship Sedans

What defines the modern flagship sedan? Is it luxury, space, power, or technology?

That question doesn’t have an easy answer, but it was one BMW was faced with when creating the seventh-generation 7-Series. An upper-class icon, the redesigned model combines all four of those attributes with an available electric powertrain and driving dynamics that need to be experienced to be believed.
The end result is near perfection as the sedan lives up to the ethos of the ‘best car to drive and the best car to be driven in.’
A Bold, Imposing Look 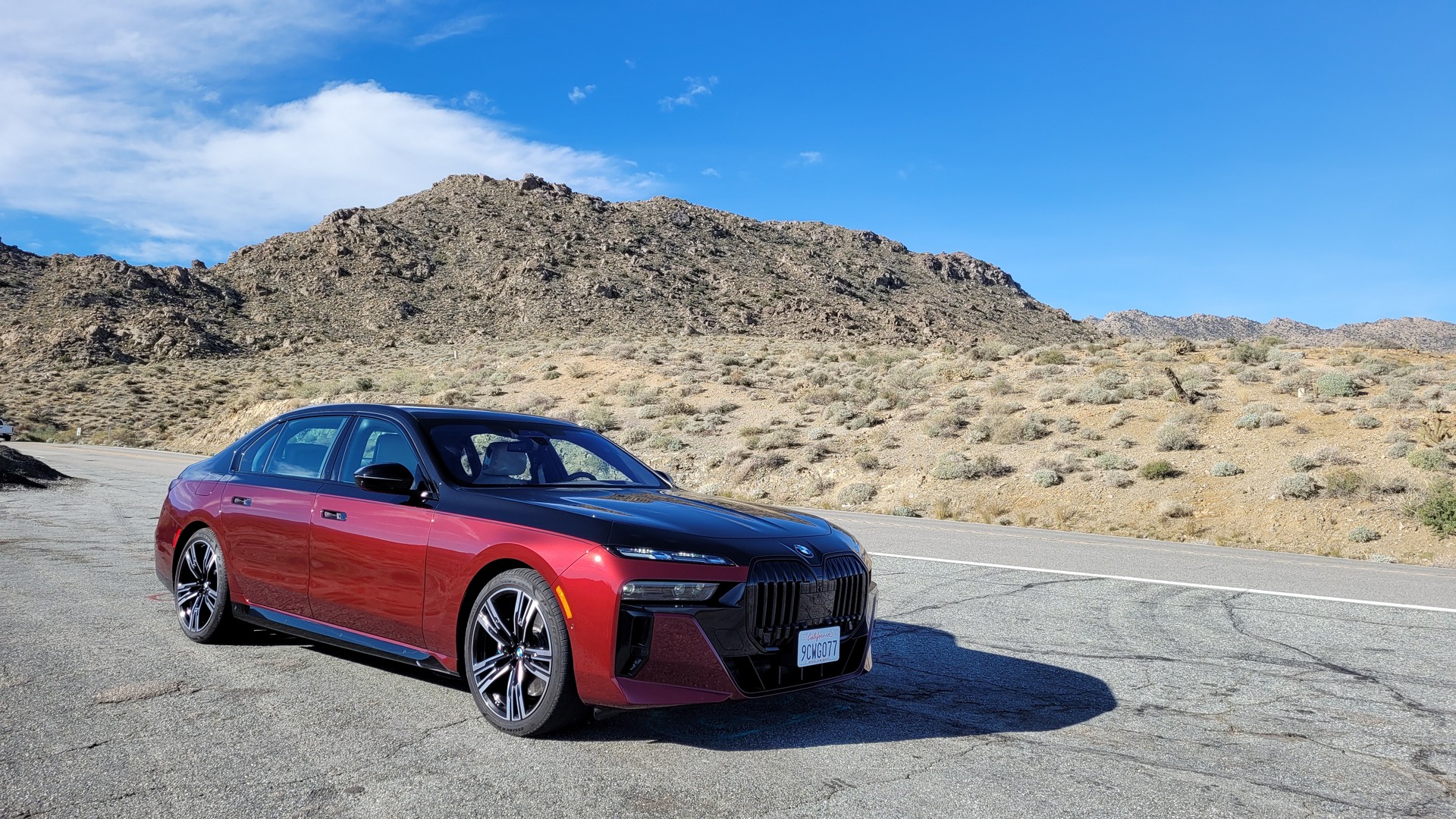 Fast Facts > > >
> Model: 2023 BMW 760i xDrive & i7 xDrive60
> Starting Price: $113,600 / $119,300
> Power: 536 hp
> Fuel Economy / Range: 18/26/21 mpg or up to 318 miles
> On Sale: This fall
While flagship sedans tend to play it safe, BMW is no stranger to taking risks with the 7-Series. The E65 provoked strong reactions and there’s little doubt the G70 will do the same.
The car immediately stands out as it features a distinctive front fascia with a massive kidney grille that is flanked by split lighting units. This design debuted on the facelifted X7 and will be unique to the company’s flagship vehicles.
Getting back to the lights, the upper units serve as daytime running lights and turn signals, while the lower units are recessed Adaptive LED headlights with standard high beam assist. The lights can be accented by Swarovski crystals and owners will find a “dynamic light carpet,” which uses LEDs integrated into the door sills to project four graphics, one after another, onto the ground just outside the doors. 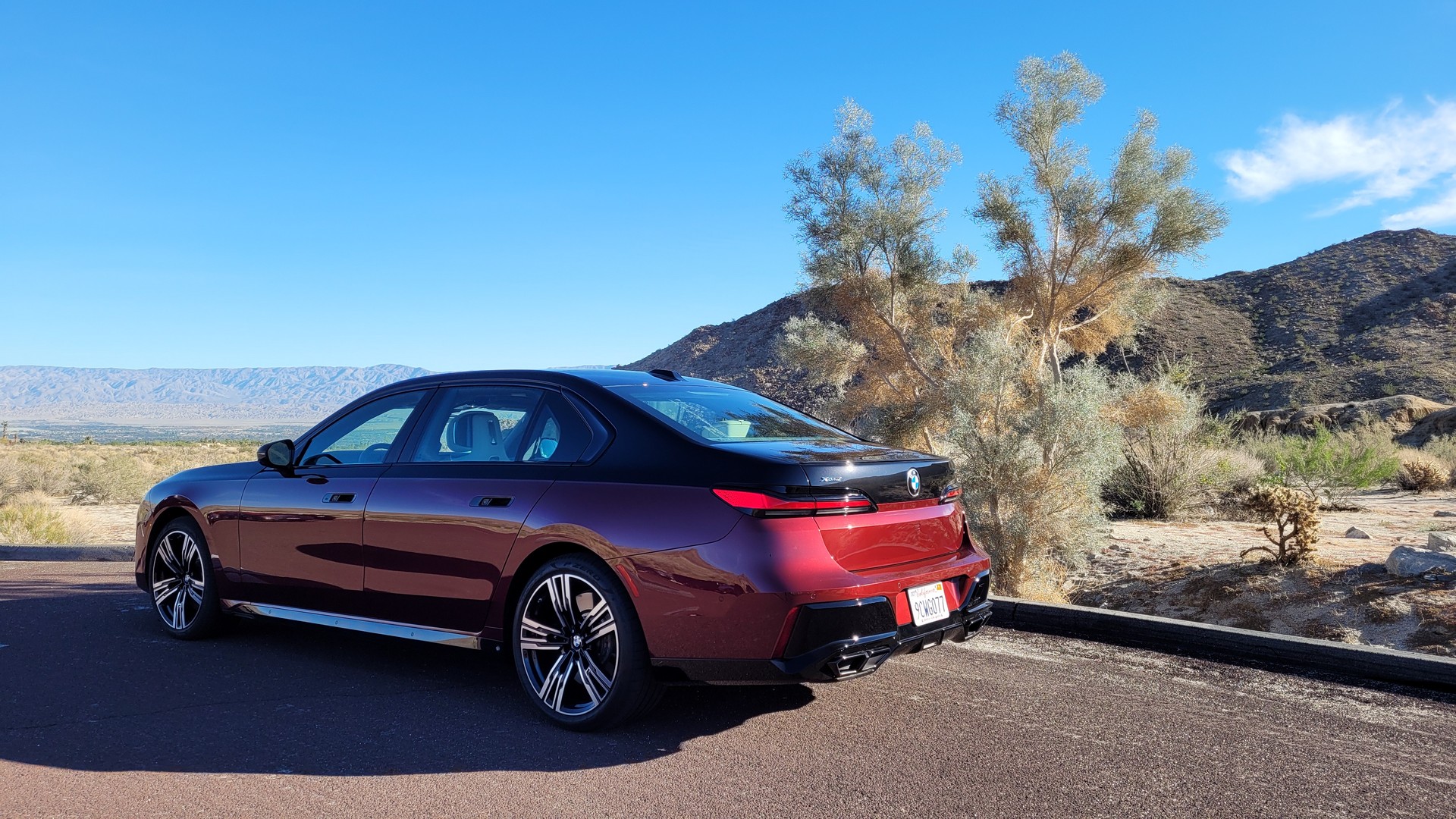 While the front end will prove divisive, the rest of the sedan adopts a more evolutionary design. The bodywork has been streamlined, and there’s a new interpretation of the Hofmeister kink as it’s now rendered in fixed chrome. The model also sports a subtle shoulder line and new flush-mounted door handles.
Speaking of the doors, they can open and close at the touch of a button. This feels a little gimmicky and the doors can be slow to open. However, there’s something wonderful about hitting a button on the dash and having the driver’s side door fully open by itself.
The i7 and 7-Series are virtually identical, but there are a number of small differences between them. Besides a blocked off grille, the EV comes equipped with a unique rear end and aerodynamically optimized 20-inch wheels. Buyers will also find subtle ‘i’ badging and BMW roundels with a blue surround.
Besides the new looks, the sedan has grown in size as the model now measures 212.2 inches (5,390 mm) long, 76.8 inches (1,951 mm) wide, and 60.8 inches (1,544 mm) tall with a wheelbase that spans 126.6 inches (3,216 mm). These numbers closely mirror the Mercedes S-Class as both models have the same wheelbase, although the 7-Series is 4 inches (102 mm) longer.
A Streamlined And Tech-Forward Cabin 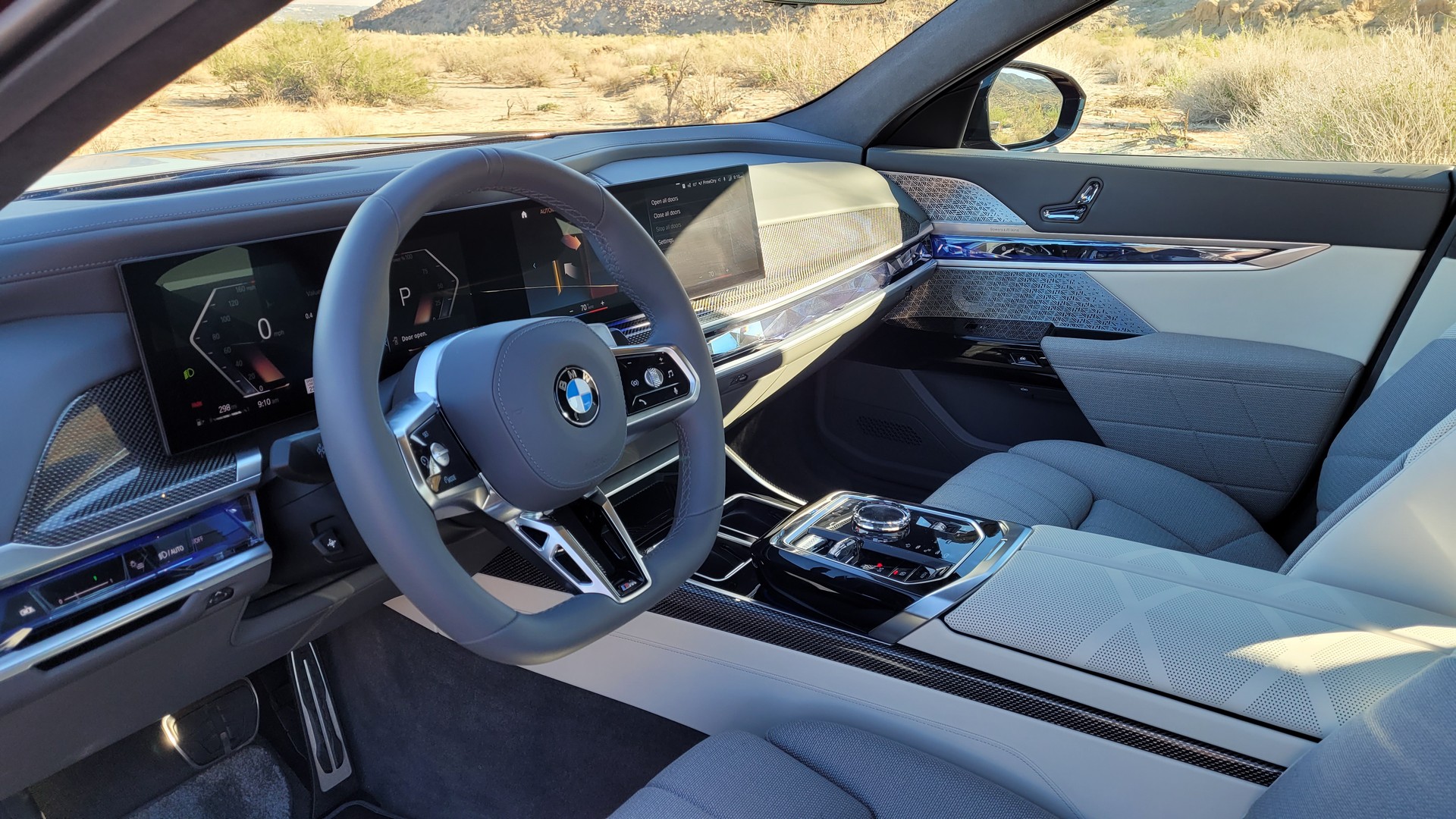 The bold design gives the 7-Series an unmistakable presence, but it’s what’s inside that really matters. Thankfully, the interior doesn’t disappoint as the cabin is ultra-luxurious and impressively high-tech.
Once seated behind the two- or three-spoke steering wheel, drivers will find themselves looking at an all-new Curved Display. It consists of a crisp 12.3-inch digital instrument cluster and a 14.9-inch infotainment system.
The car leans heavily on the infotainment display as traditional switchgear has largely been eliminated. This results in a far more modern and streamlined appearance, although it requires owners to put in some effort to adjust common controls. 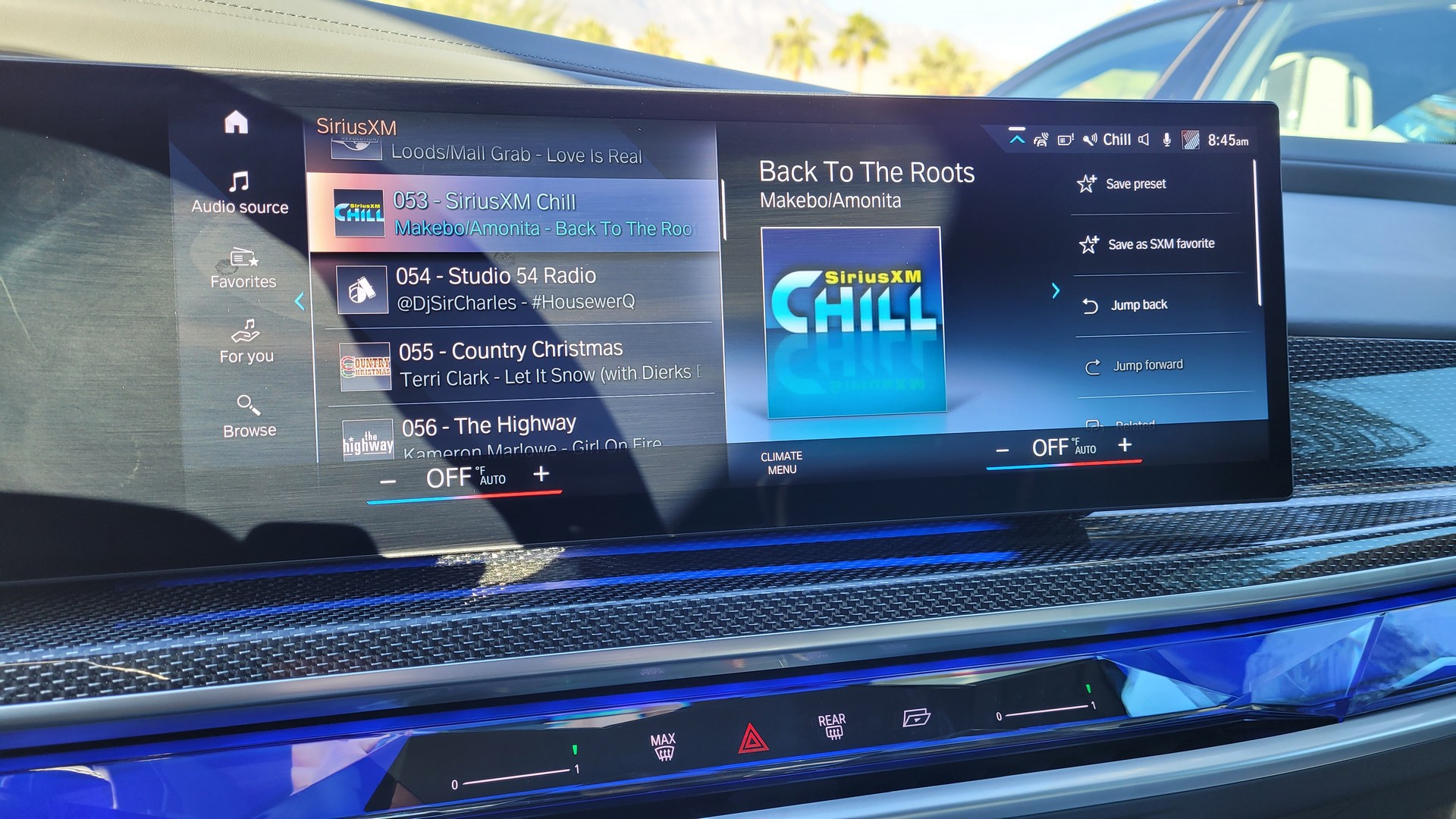 This isn’t much of an issue as temperature settings for the driver and front passenger are always displayed. They’re separated by a Climate Menu ‘button’ that pulls up a screen, which enables owners to easily turn on the heated steering wheel and heated/ventilated front seats as well as adjust the fan speed and air flow.
Read: 2023 BMW 7-Series Range Grows With Two Plug-Ins And An Updated Diesel In Europe
Besides climate controls, the infotainment system provides access to countless other settings and features a customizable home screen with widgets. The system is fast, fluid, and intuitive, although its speech recognition capabilities leave something to be desired. Getting the system to navigate to spoken addresses was a frustrating and repetitive experience as the car routinely heard things differently than what was said.
Once the correct address was finally entered, the navigation system worked flawlessly and getting to our destination was a breeze thanks to the standard head-up display and the available Augmented View function. The latter shows navigation information over a live video feed displayed in the instrument cluster. 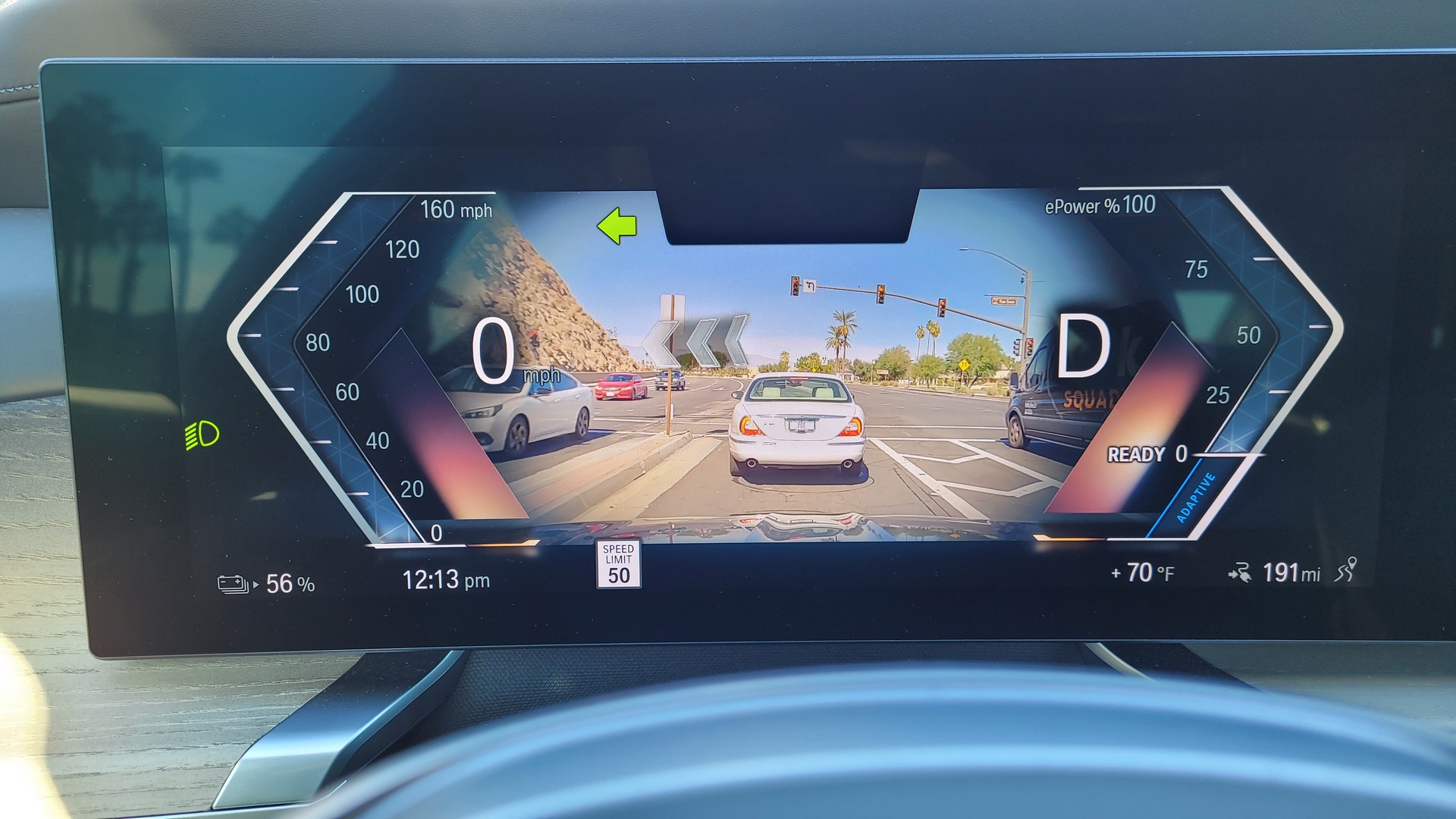 Putting the screens aside, the 7-Series has a new Interaction Bar which wraps around the front of the cabin and features a crystalline surface with backlighting as well as touch-sensitive control panels. The latter can be used for adjusting the hidden air vents as well as heating the front/rear windows and opening the glove box.
While the model is largely devoid of physical switchgear, the center console has glass controls for the shifter, volume, and infotainment system. It also houses dedicated buttons to pull up the drive mode selector as well as the home, media, telephone, and navigation screens.
Elsewhere, there are new multi-contour front seats, which are comfortable and supportive while also being wider than their predecessors. They offer heating, ventilation, and a massage function with nine different settings. 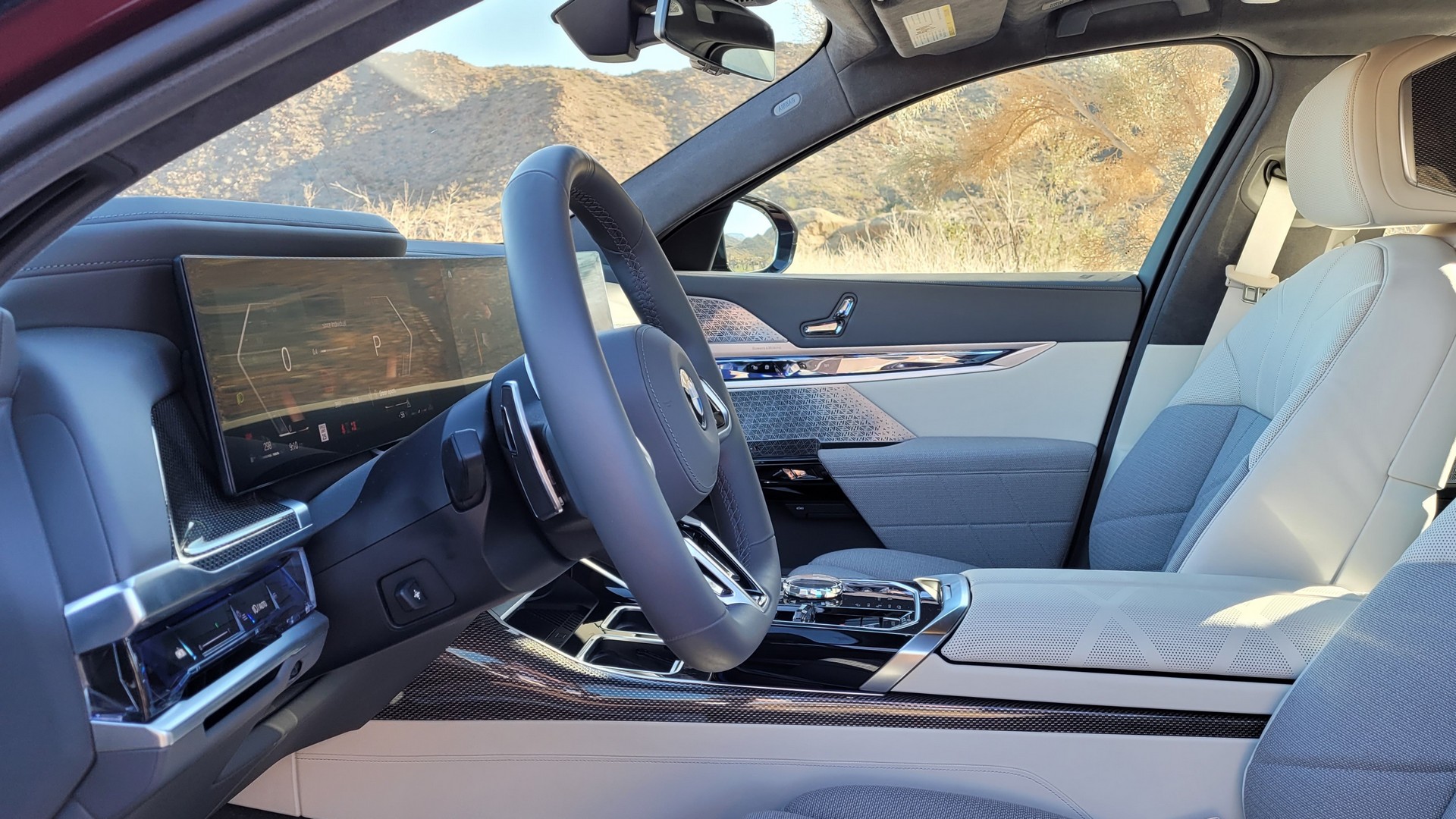 The entry-level 740i has leather-like Veganza upholstery, while extended Merino leather comes standard on higher-end variants. Customers can also opt for the BMW Individual Merino leather/cashmere wool upholstery that was found on our testers. It’s undeniably elegant and features a two-tone design with Smoke White leather and Light Grey cloth.
Buyers can also get an Alcantara headliner, wood or carbon fiber trim, and a Radiant Heating Package that adds a heated steering wheel as well as heated armrests. The model comes standard with a Bowers & Wilkins surround sound system with stainless steel speaker grilles, although audiophiles will want to upgrade to the Bowers & Wilkins diamond surround sound system that sports up to 36 speakers including four integrated into the headliner.
Speaking of the ceiling, the 7-Series comes standard with a Panoramic Sky Lounge LED fixed glass roof, which is larger than its predecessor and features an assortment of different lighting options.
A Luxurious Passenger Compartment With A Massive 31-Inch Screen

While the driver’s seat is the place to be, we wouldn’t fault anyone for wanting to get chauffeured in the 7-Series as the rear passenger compartment is essentially a living room on wheels. The key highlight is the all-new BMW Theater Screen, which makes traditional rear seat entertainment systems feel as dated as the Sony Walkmans and Nintendo Game Boys that served as the rear seat entertainment of my youth.
After hitting a virtual button on the 5.5-inch displays integrated into the rear door panels, a massive 31.3-inch 8K touchscreen display folds down from the ceiling. As this is happening, the sunshades close and the rear ambient lighting is dimmed to turn the rear passenger compartment into a movie theater.
Thankfully, there’s plenty to watch as the screen supports streaming services such as Netflix, Amazon Prime Video, and YouTube. This means rear seat passengers can watch films and TV shows in 16:9, 21:9, or 32:9 aspect ratios at their leisure. Sound is pumped through the Bowers & Wilkins audio system, although passengers can also connect Bluetooth headphones to listen without disturbing the driver. 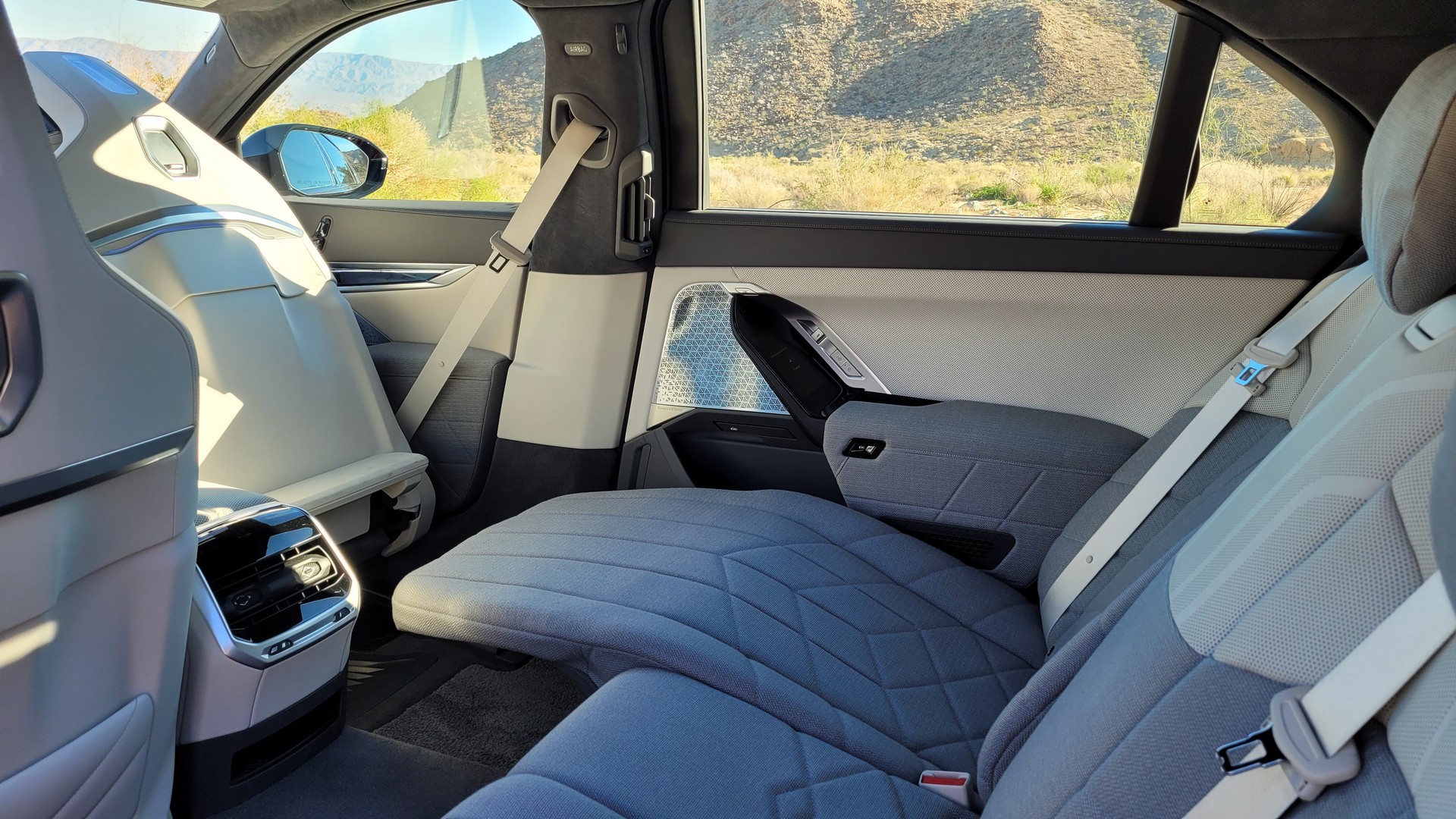 While the screen is truly a jaw dropping feature, it’s not the only thing that helps to make the experience stand out. In particular, the optional Executive Lounge Package features a rear seat that can be reclined up to 42.5^0. However, the seat is more notable for having a powered leg rest and a foot rest on the back of the front passenger seat.
The front seat automatically slides forward and tips down when the leg rest is deployed. When combined with the aforementioned BMW Theater Screen, the experience is a bit like relaxing in a recliner in front of a TV at home.
Those are just some of the highlights as the 7-Series sports a four-zone climate control system and an available wireless smartphone charger in the rear armrest. The door-mounted displays also enable passengers to adjust their seat, turn on the heating, ventilation, and massage functions, open and close blinds, and change the car’s media/radio settings. 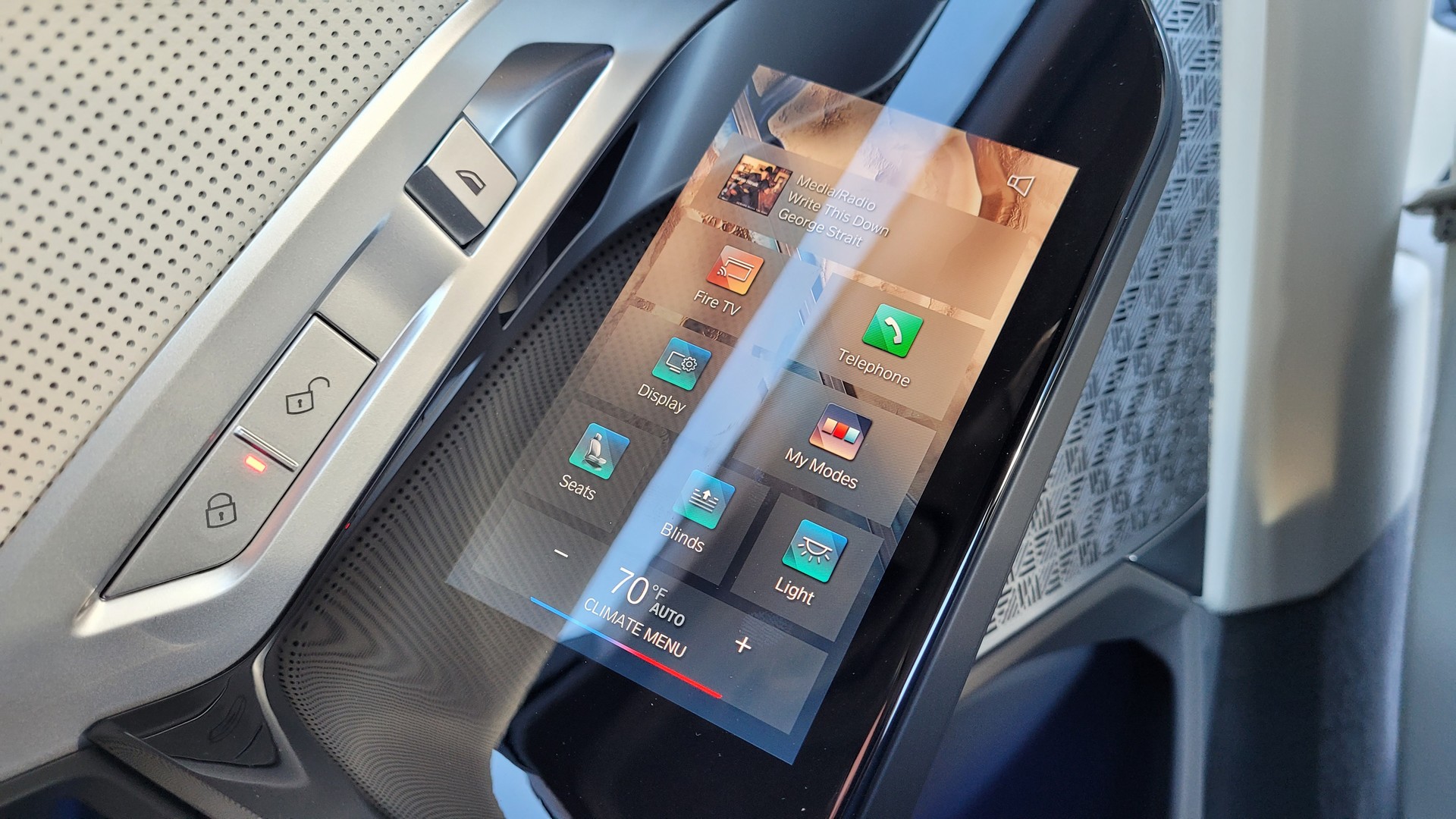 While that’s a lot to take in, BMW deserves credit for nailing the user experience. With so many high-tech toys, owners could have easily been overwhelmed, but the smartphone-like door displays are intuitive and make accessing various features incredibly simple.
It’s also easy to get comfortable in the rear seats, which offer an impressive 43.3 inches (1,100 mm) of legroom. That drops to 42.8 inches (1,087 mm) in the i7 and the EV also gives up 2.3 cubic feet (65 liters) of trunk space for a total of 11.4 cubic feet (323 liters).
The 760i xDrive Is A Proper Driver’s Car 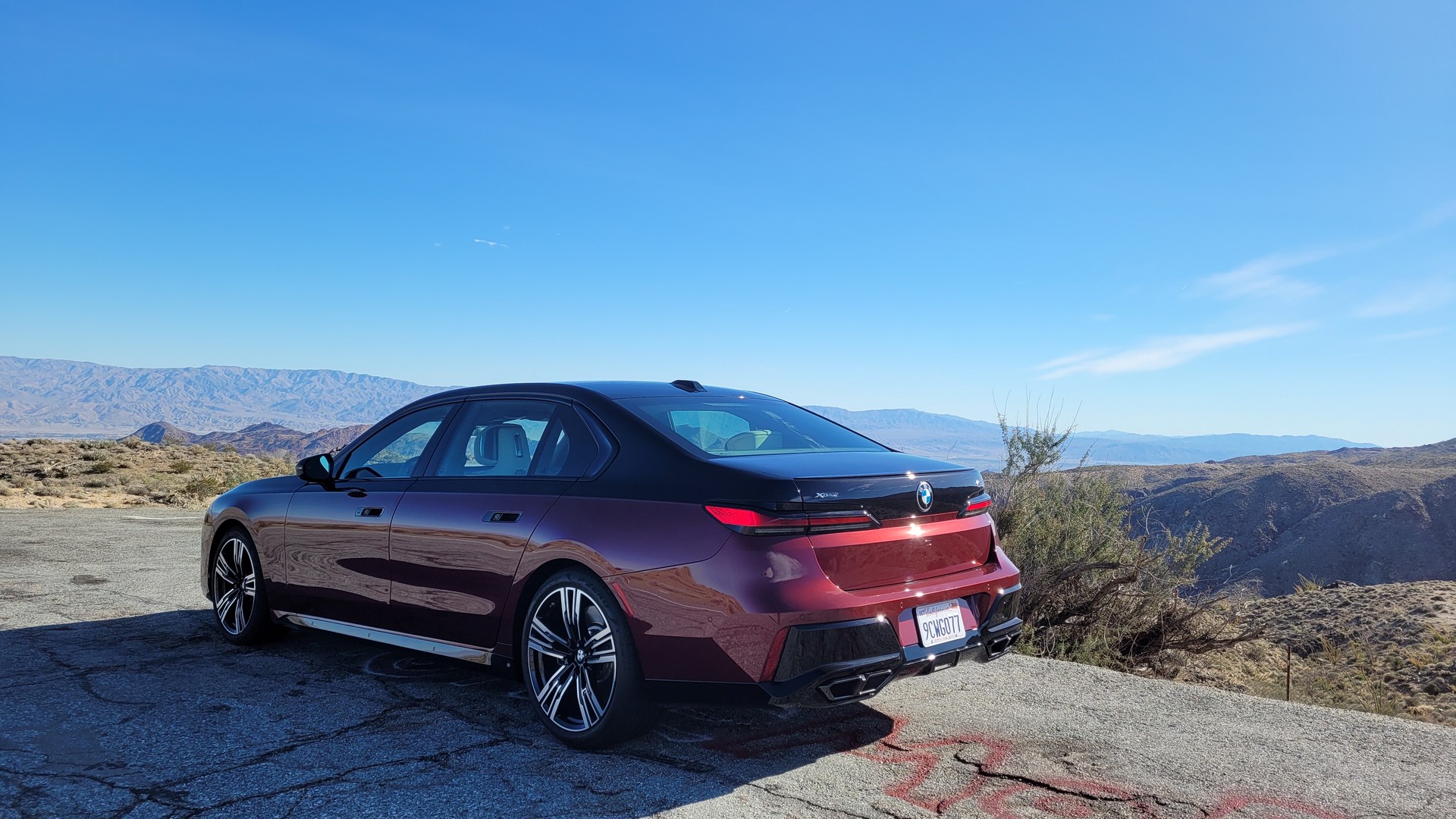 While the i7’s electric powertrain is the most interesting addition for 2023, the 7-Series hasn’t abandoned petrol power. Quite the opposite as the 740i is equipped with a “substantially upgraded” 3.0-liter inline-six that features an upgraded turbocharger as well as redesigned intake ports and combustion chambers. Thanks to these and other modifications, the engine now develops 375 hp (280 kW / 380 PS) and 383 lb-ft (519 Nm) of torque for an impressive increase of 40 hp (30 kW / 41 PS) and 53 lb-ft (72 Nm).
Besides the 740i, BMW offers the amazing 760i xDrive, which is exclusive to North America. It has a new twin-turbo 4.4-liter V8, which “utilizes the thermodynamic benefits of a cross-bank exhaust manifold and external engine oil cooling.” The engine also sports a reinforced crankshaft drive, a new oil pump, and further developed turbocharging with a blow-off valve.
This enables the engine to produce 536 hp (400 kW / 543 PS) and 553 lb-ft (749 Nm) of torque, which is 13 hp (10 kW / 13 PS) more than the old 750i xDrive. While that’s a modest gain, both engines are connected to a new eight-speed automatic transmission which features an integrated electric motor that can deliver a boost of up to 12 hp (9 kW / 12 PS) and 147 lb-ft (199 Nm) of torque. The latter is powered by a small battery and it enables the car to deliver improved efficiency and responsiveness. 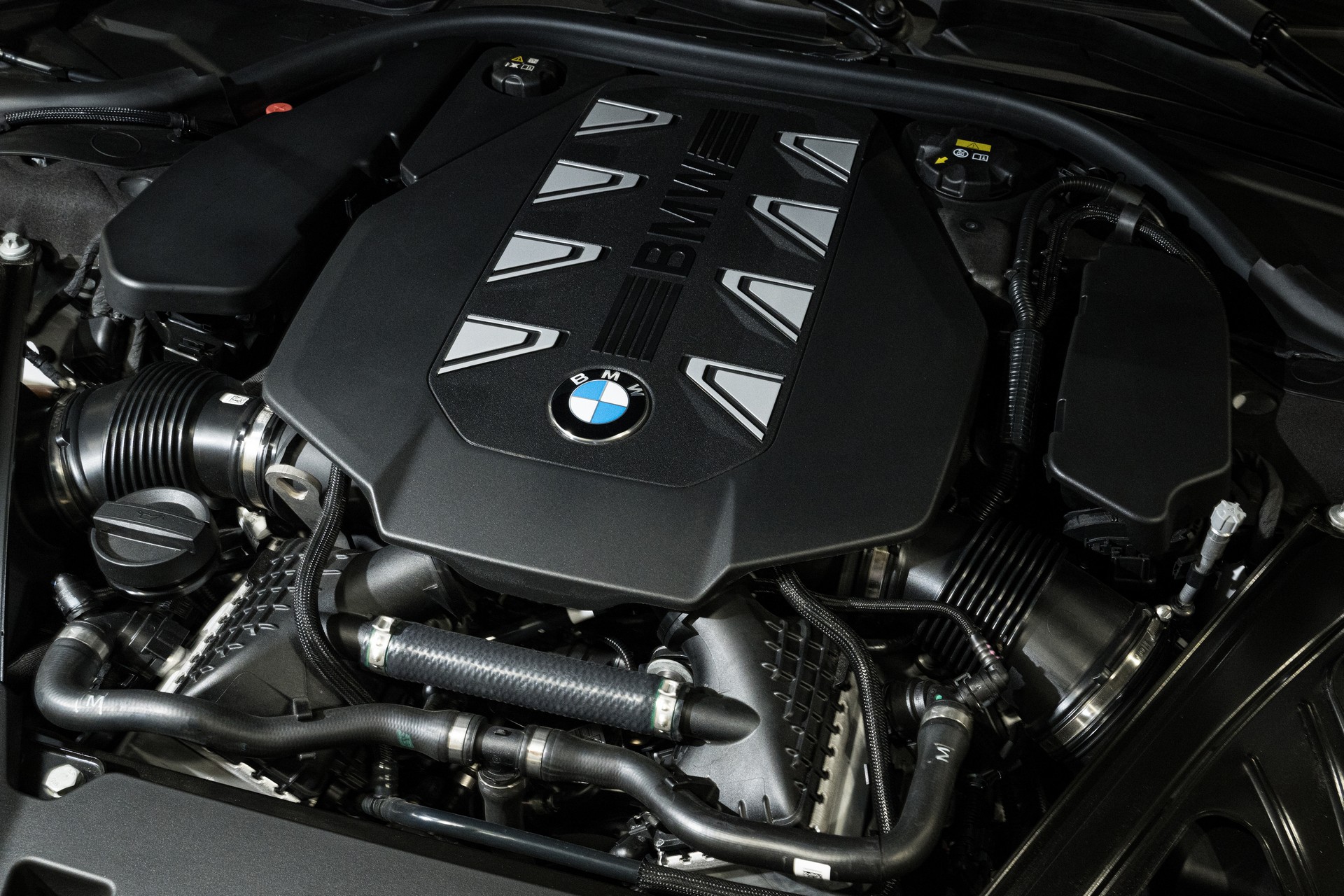